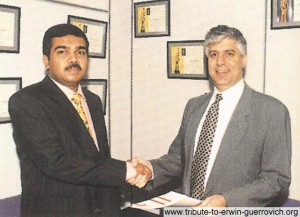 Intermarkets Advertising announced that it has awarded a contract for upgrading and expanding its computer networking system to the Dubai-based Alan Technology.
The contract was signed in Dubai between Michel Costandi, Managing Director of Intermarkets and Sudhir Kumar, manager, Sales and Marketing of Alan Technology.
According to Costandi, the upgrading of Intermarkets’ IT systems is aimed at enhancing the agency’s response time to client needs.
“It is part of an ongoing overall corporate expansion strategy to ensure improved efficiency.”
Originally published in ArabAd, October 1998