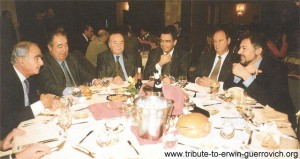 The Lebanese Chapter of the IAA has organised a lunch at Marriott Hotel early February, on the occasion of the visit to Lebanon of Basil Bicknell, President of the IAA World Congress Committee, “London 2000″, which will take place in London in June 2000. This event was held under the auspices of Arthur Nazarian, Minister of Tourism, and was attended by advertisers, advertising agencies, media and businessmen.

Jean-Claude Boulos, President of the Lebanese Chapter, welcomed the guests. Walid Azzi, Vice-President for international affairs, thanked them for coming as well as Bicknell for his kind visit. Azzi then spoke about the importance of the lAA’s 37th International Congress that will take place on 6-9 June 2000 in London, and which will be followed by lAA’s International Congress on May 2002 in Beirut. This Congress will gather more than 70 chapters throughout the world. 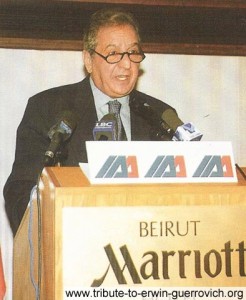 Azzi, however, encouraged everybody to participate in this year’s Congress. He said, “It is a special and dear occasion to our country which will have the honour to host the 2002 World Congress”.

The IAA Lebanon Chapter, as a matter of fact, will organise the closing dinner during the London conference. More than 1500 distinguished guests are expected to attend the event.
He also seized the occasion to call on sponsorships, not only for the gala dinner in London, but, rather for future events that are going to take place in the 2002 Congress.
“We call upon representatives of the media and advertising agencies as well as advertisers to participate in making this year’s dinner a success, and in the coming two years, make the best out of the World Congress,” he concluded.

Nazarian said that the economy and tourism in Lebanon are only prosperous because of the advertisers’ strong support.

In his turn Bicknell showed 2 videos concerning the London’s Congress, as well as a complete presentation of it: Sites, speakers, s 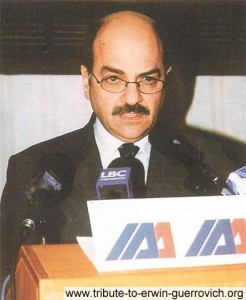 ubjects, debates, in addition to the celebration programme and the gala night that will be sponsored by the Lebanese Chapter.
Bicknell affirmed that more than 2000 participants are expected at the Congress, which he emphasised “will definitely be a huge success”.

The London chapter is one of the Association’s largest and this is reflected in the planning and preparation that it has put into its showcase event, the themes of which are wrapped around the four pillars of creativity, technology, culture and ethics – all of which, claim the organising committee, are currently shaping the future of advertising.

Speakers at the congress are drawn from all media and include Body Shop founder Anita Roddick, Jamie Shea, NATO spokesman during the Kosovo crisis, and Elisabeth Murdoch, director of Sky Networks, BSkyB. The list of sponsors reads like a Who’s Who of media and industry heavyweights.

Boulos, also stressed the need for sponsorship, relaying an upbeat message from President Lahoud who declared that advertising is “the business of the new millennium.” Software manufacturers might argue with him but the sentiment was clear: support for Lebanon 2002 is coming from the very top and it is being seen as a excellent opportunity for Lebanon to reduce its overdraft of bad publicity.

The Beirut congress, entitled 2002: The New Odyssey, is expected to attract as many as 2,000 delegates to Beirut for the five-day convention in May. Hosting the conference is seen as a just reward for the local advertising industry’s pioneering role in the region as well as its achievements within the IAA. It will cost $2 million to host. Everything from insurance, gala dinners, lunches, even coffee breaks, will have to be covered. But they are confident that the budget could be balanced by sponsorship – conservatively assessed at around $2.3 mil ion.

Azzi sees the greatest aspect of the event as the gathering together of nearly 2,000 delegates, representing billions of dollars and coming from the five contents, bringing their known how and technology.

An enormous task? The delegates can take heart that in June of last year IAA Lebanon executives went to Paris to sell Lebanon as the venue for 2002 on the same night as the Israeli air raids. They won then and no doubt they can win again.