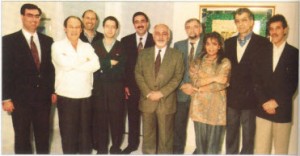 Intermarkets managers after the meeting

During the meeting, the general management announced the opening of offices in Syria.
“By extending its network while taking current economic factors and client’s needs into account. Intermarkets continues in its pioneering tradition in Middle East advertising since 1960,” the management announced.
(ArabAd, 1994)