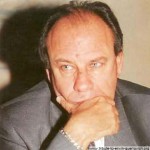 As the one who discovered the hidden talents of Mokhtar Chemly that are revealed in his beautiful paintings on the theme of ‘Lebanon Forever’, I would appreciate your publishing this letter as a public tribute to all who deserve it, and for the magnificent response of the Lebanese business and communication community to Chemly’s recent exhibition.

Thanks first to Mokhtar Chemly who allowed his paintings to be exhibited and sold.

Special thanks go to Ramsay Najjar, president of the IAA-Lebanon Chapter, Said Sabbagha, president of the Lebanese Advertising Agencies Association, and Phillip Hitti, its past president; all of whom wholeheartedly provided both IAA and LAA sponsorships, as well as for their personal efforts and support. Special thanks also to Joseph Rif, whose generosity in providing the use of his impeccably organised gallery, Station des Arts, was much appreciated.

A note of appreciation for all media, print as well as audiovisual, that covered the Mokhtar Chemly exhibition.

Finally, a special thought for Eddie Moutran who has held steadfastly on to his Lebanese roots, despite having to spend a great deal of time away from the country for business reasons. He made a point of seeing the exhibition on a recent visit, and has decided to put Mokhtar paintings in all of his company’s Middle East offices.