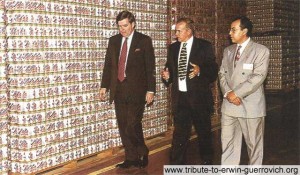 As part of efforts to gain better regional market share and consumer recognition, Coca-Cola has awarded its first public-relations contract for Gulf countries (other than Saudi Arabia), to Dubai-based Intermarkets Public Relations.

Coke also created the new post of external affairs manager in January. It became operational a couple of months ago, around the same time the search for a public relations consultancy began.

The new post and the public relations contract for Kuwait, Bahrain, Qatar, UAE and Oman, indicates that Coke is now pushing for better market share in these Pepsi dominated markets. Coke recently announced that its Al Ain bottler raised capacity by 50 percent. The plant supplies UAE, Qatar and Oman.

He admitted Coke’s PR activity has so far been a “little low” but that it has “definitely achieved a lot” in Saudi Arabia through SPRC. “We look forward to the same kind of change in the rest of the Gulf,” he added.

“This is an invaluable account. We are extremely pleased. Coca-Cola is one of our most important clients and we will cer­tainly respond in that spirit,” said Roger Fennings, Intermarkets Public Relations managing director.

The vigorous selection process took a couple of months. Finally, there was a competitive pitch between three firms.

“The passion, knowledge, competency and creativity dis­played (by Intermarkets) came through in the presentation and it was awarded the open-ended contract on September 15,” Norris said.

Selection began in midsummer when Fennings was out of town and another Intermarkets staffer, Sunil John, was in India for the delivery of his baby. Both came back to put the presenta­tion together, said Bashar Al Kadhi, Intermarkets account direc­tor.

“This demonstrated our enthusiasm and determination to win the account. This is the kind of effort we put in any way-win or lose—for any account,” Fennings said.

“We can promise that you can look forward to seeing and hearing more about Coca-Cola and what it is all about in the Gulf,” Fennings said, announcing that Coke is the major sponsor for the Asia Cup soccer tourney which will be held in the UAE in December to coincide with the country’s 25th anniversary.