Guerrovich: Media mess will solve itself 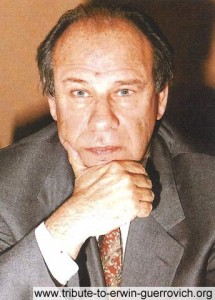 When Arab Ad met Erwin Guerrovich of Intermarkets for a wide-ranging interview the other day, he had to borrow an office for the meeting. It wasn’t hard to guess the reason why. In its present premises, Intermarkets is bursting at the seams and is on the move for the fourth time in three years. Actually, it will be a homecoming for the agency. Intermarkets is moving upstairs from its current offices to its old ones on the ninth and 10th floors of the Myrna Chalouhi Building in Beirut’s Sin El-Fil. In 1990 these were looted and burned during a bout of fighting. Now the original offices have been refurbished. But even there, Intermarkets will be short of space. So it is taking over the 11 th floor as well. “Expansion is in the air at Intermarkets. The agency intends to open an office in Damascus before the end of the year to service Syrian clients. To do so, Intermarkets is buying into an unnamed local advertising agency”, Guerrovich says.

But although the move upstairs clearly means Intermarkets is reinstalling its head office in Beirut, Guerrovich does not like all that he finds here. “There are many things that make me uneasy and unhappy about Lebanon,” he says.
After 15 years of shuttling between Europe, the Gulf and Lebanon and more than a year during which Beirut has been his main operational base, Guerrovich feels he can place his homeland in perspective. What he finds “has all the characteristics of an underdeveloped country.”
He referred only briefly to the physical damage inflicted by war and it is apparent that the principal field of under-development is human rather than material. Even so, the two sometimes come together. “I wonder what would happen if telephones worked 100% correctly?” he asks. “How many people would feel unbalanced? It’s such a useful excuse for doing nothing.”
Under-development also exists on several levels, according to Guerrovich. As an employer on the lookout for advertising talent, he says he is “appalled” by the low levels of competence displayed by job-seekers. Their ability to write and even to spell is abysmally inadequate, although most already have two to three years’ experience in an ad agency, he says.
The business climate in Lebanon, once a byword for sophistication, has “shifted 180 degrees,” Guerrovich finds. Lebanese businessmen who used their commercial shrewdness in the past to develop their own enterprises, “now use that shrewdness to knock each other. There is nonchalance and a lack of initiative.”
There is also, Guerrovich feels, a change for the worse in the attitude of today’s Lebanese advertisers to their advertising agencies. “They do not understand the true nature of a good partnership between a client and an advertising agency,” he says.
Part of the problem, he agrees, is due to the chaotic conditions of Lebanon’s communications industry, which he describes as becoming “a jungle” over the past two years. But he makes it plain this is not the whole story.
Lebanese business executives, he believes, have lost sight of their proper functions – and in doing so are damaging their own interests. Most, he says, are so preoccupied by cost-cutting that they forget that the time spent trimming expenses would have been better and more profitably employed doing their real jobs.
“They do not have the initiative or the creative thinking to develop their own business,” he says. The result, when all factors are taken into account, is false economy: the savings the businessmen boast about are actually costing their companies money.
Guerrovich says he has been unable to spot any progress towards breaking free from mental under-development. Instead, he discerns “an individualism that tends to grow with time. We depend more and more on ourselves and the State is viewed almost as an enemy. Globally, this attitude is very negative.”
He contrasts what he finds in Lebanon with the climate in the Gulf, where he now finds it “a real pleasure to do business!”